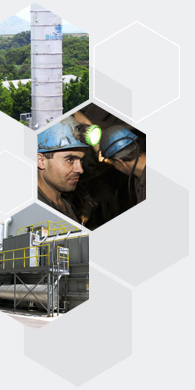 Biothermica develops, finances and implements carbon and energy projects based on the destruction and utilization of methane emissions emitted by landfill sites and underground coal mine ventilation systems. Carbon and energy revenues are generated based on Biothermica’s own proprietary technologies, such as the VAMOX® technology, applied to the destruction of coal mine ventilation air methane (VAM).

The company oversees all development stages, from the design of the project to the commercialization of renewable energy and emission reduction credits. Project stages are typically as follows:

Site selection and feasibility studies
The first step consists in selecting the best site for the development of the project. The following technical and economic studies are undertaken:

Financing strategy
If the studies are conclusive and the site’s characteristics are worth exploiting, Biothermica carries out the financing of the project, which comprises:

Permits and authorizations
The necessary authorizations regarding the construction of the project as well as its connexion to the local or national electricity grid are obtained from governmental and municipal authorities.

Energy sales
Depending on the legal context applicable to the project, the energy produced can be sold to different types of buyers. Energy production from renewable sources can also generate energy certificates which are tradable on the North-American market.

Carbon credit sales
Biothermica’s expertise covers the full carbon project cycle, as the company has developed projects under various international and national carbon standards since 2005. A carbon project is typically characterized by the following stages: